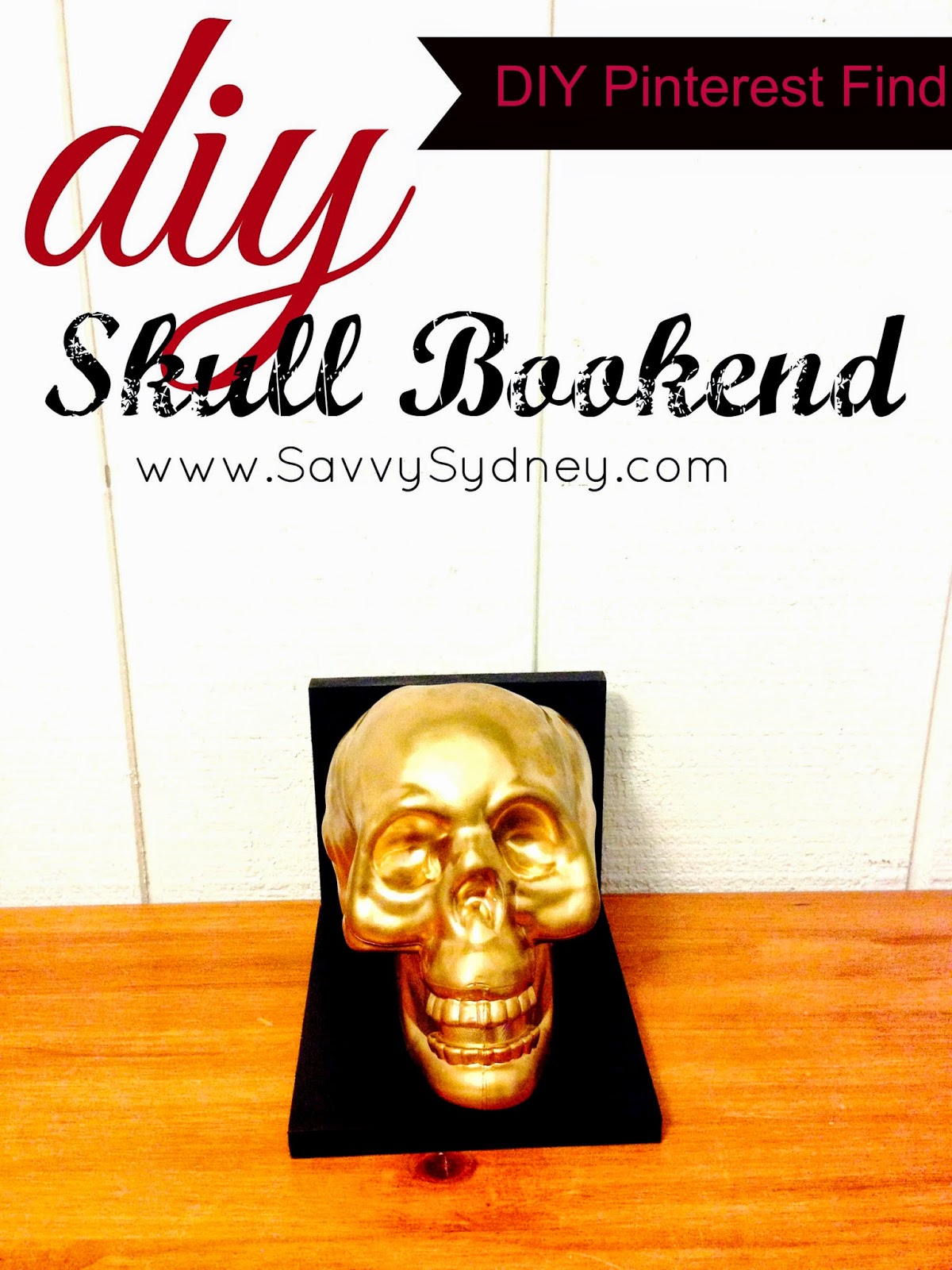 So I'm going to admit, that not everything I do is a completely original idea. Not all of us are craft masterminds. I found this on Pinterest from a blog called Curbly. That is the original link to the post where I got the idea. The major difference I made between theirs and mine... Is that I also used a backpiece, rather than just a bottom piece; also I sat the face of mine up higher.

What you need for this project is: 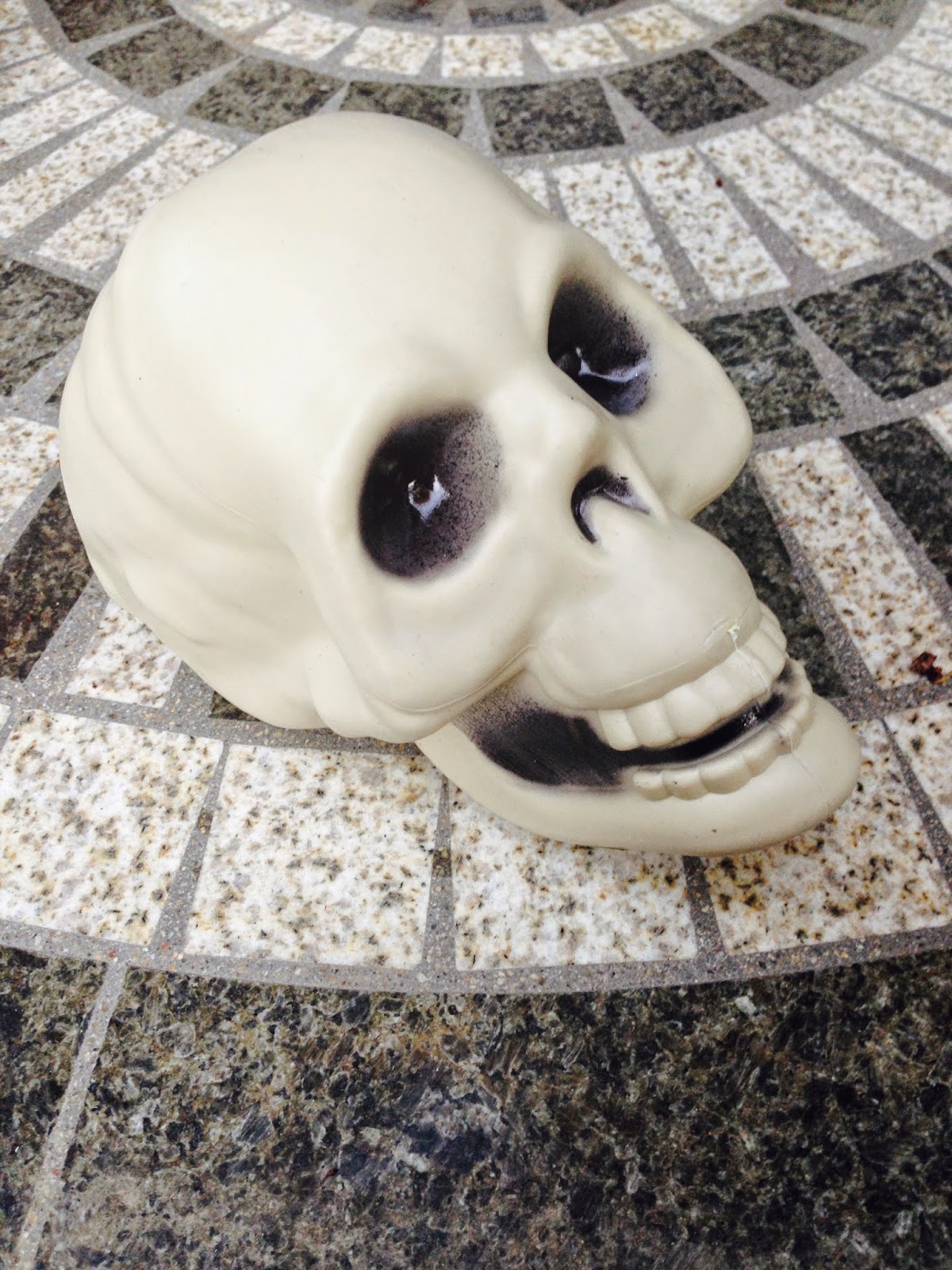 This was the original Dollar Tree skull. It's a really light plastic with almost no weight to it. Which is precisely why you need the sand. It's not much of a bookend if the books push over the bookend.

So my first two steps were to paint the wood pieces and drill a hole in the plastic skull. (Honestly I painted it first and then did the sand... and ended up having to re-paint. So I am trying to save ya'll from another of my mini-failures) I'm definitely not perfect guys. Honestly... I make about a minimum of three mistakes with just about everything I make. It's the crafters curse. It haunts me... but I just live with it. Mostly because my attempts at thwarting it usually fail. (i.e. Me using gloves to protect my hands from paint here, and I end up covering 1/2 of my legs in paint instead.)   Whoops! (Sorry again babe... I'll get you some more!) So I used a drill bit to drill through the back of the skull so that I had an area to pour the sand in. My friendly advice: don't drill in one of the flat spots that you plan to use to glue to the wood... if for some reason it doesn't stick, you will not only have a broken bookend... but sand all over the place as well. 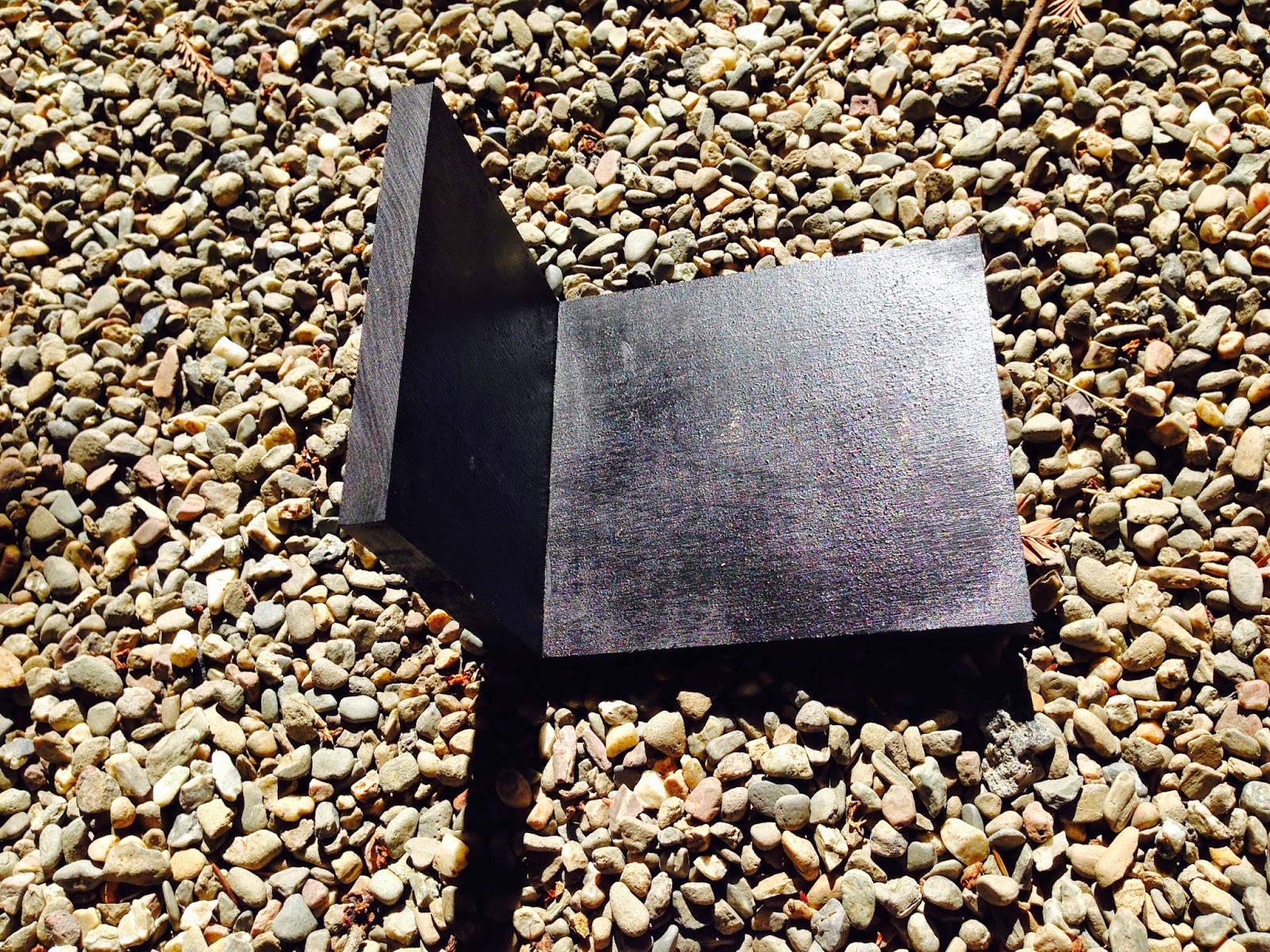 After drilling I tried to use a paper funnel to pour my sand through. Another bad idea ya'll. It ended up all over me. Terrible idea. Just make a lager hole, use a real funnel, and it would also be a good idea to do the sand pouring over a bowl. So that way.. when it inevitably spills... it gets caught in the bowl, rather than stuck to the wet paint on your legs and all over your clothes. Again: Sydney's friendly advise. Here to save you from the crafters curse. Once I had all the sand in my skull I then had to think of a way to seal it in. The bright idea I came up with? I tore a piece from the plastic bag that I had from Lowe's from my recent shopping expedition, flipped the skull on its face, and used the E6000 to glue the piece of plastic to the back of the skull. It worked really well quite honestly. I let it dry for about two hours.

Then, in my case I had to re-paint my skull... but if you followed my advise you should be painting it for the first time now. I chose Valspar Metallic Gold. I really like the black on gold color combination, it meshes well and also gives the project a bit of a personality. 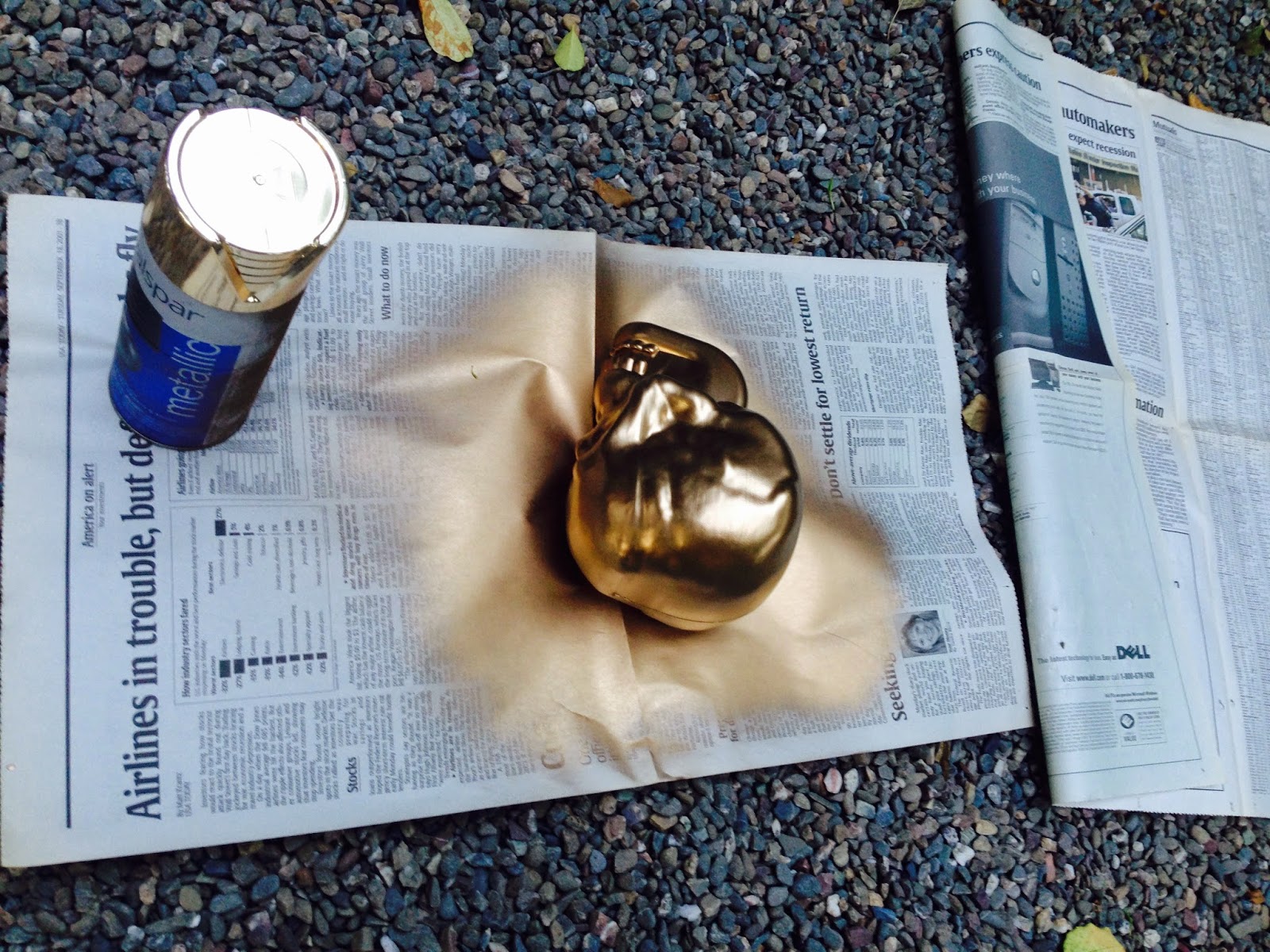 Next: I had initially used liquid concrete glue and glued the two pieces of wood together, and then nailed them together as well. The glue was just an extra touch. A backup plan essentially. Which actually ended up being a failure. The liquid concrete interacted with the spray paint and just would not dry at all.  I also used it at the end when I was trying to glue the painted skull to the painted wood as well. Essentially all it managed to do was strip the paint from the skull and rub it all over the wood and vice-versa. I had to re-paint both pieces and hunt down my E6000. It was a failure guys. It was bad. Very bad. Not to mention I almost got it in m father-in-laws very expensive deck. Sorry Bob! (Good thing it was almost an accident and not actually an accident...)

Last but not least... After finding a better glue for the project, I glued the skull to the wood and let it sit overnight. This is what my end result is. 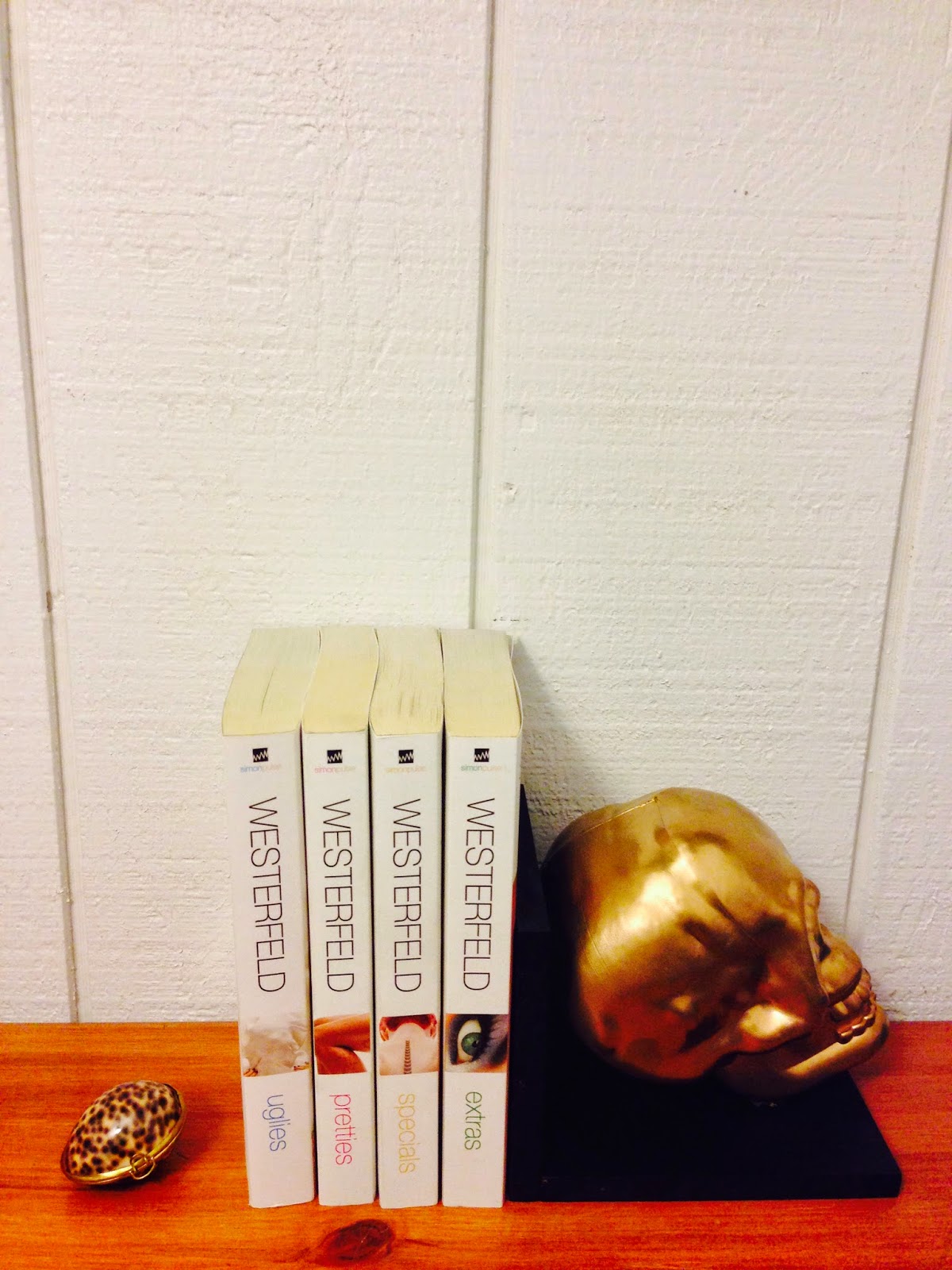 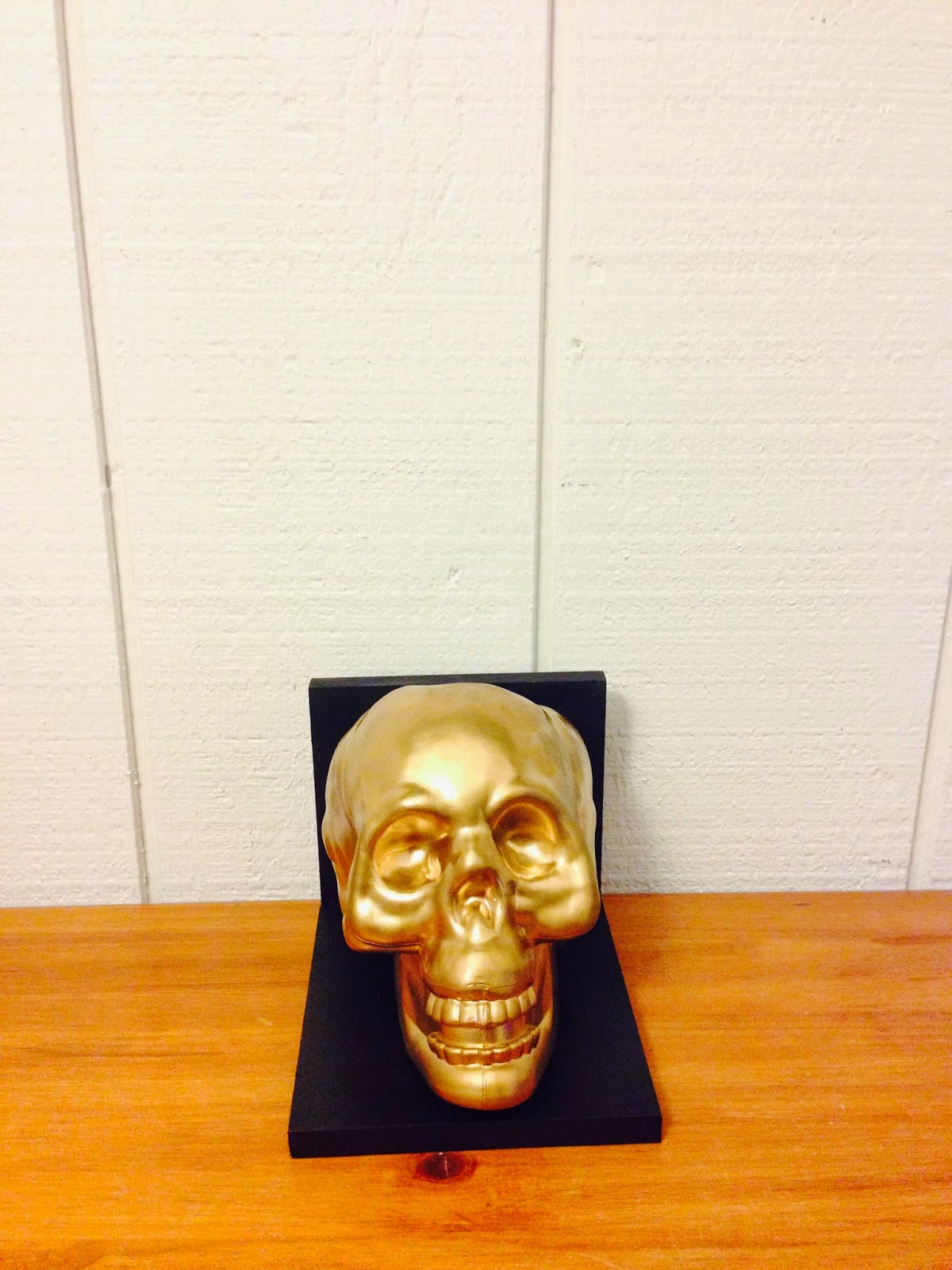 Also... Just as a p.s. I had the intention of posting all of this on Sunday, but ended up having a bad allergic reaction to a mystery bug bite. I thought it was a mosquito, my husband thought it was a spider, and my Dr. wasn't sure which it was. So I ended up with a pretty big injection and some other stuff to help it go away. It was pretty bad on Monday morning, and I didn't give into going into the Dr's until Tuesday. I actually had a patient ask me if I had chicken pox, and another ask me if I had Ebola. So basically it was embarrassing, very embarrassing.

But on that note.... What did you guys think of my Halloween DIY? Honestly... I think it will probably stick around all year. I'm quite fond of it.