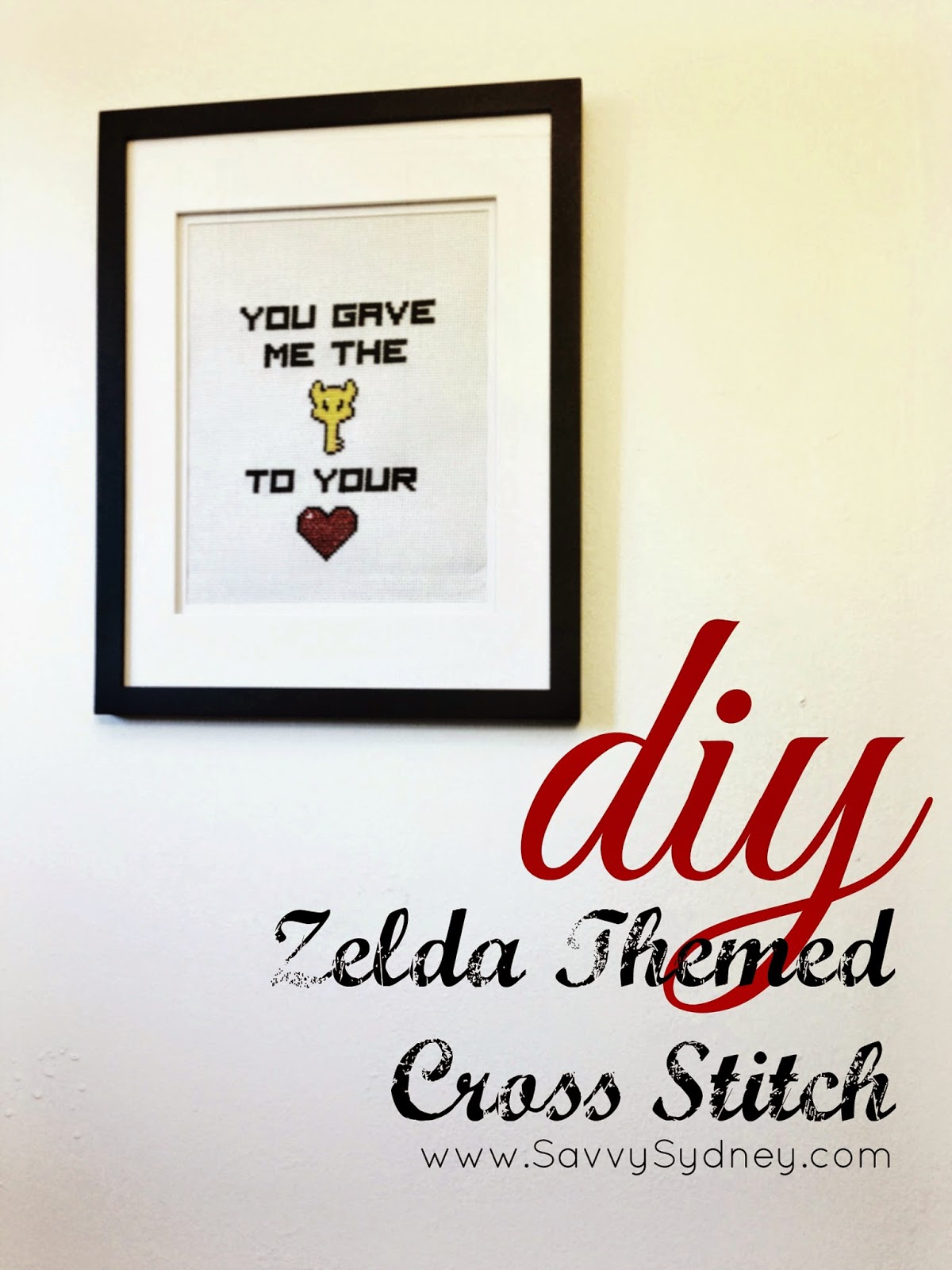 Today I have a DIY that I have done in the past. I made it as a gift for Valentines day for my husband. If you don't already know... I would explain the two of us as a moderate to severe geeky/nerdy couple. WOW, Naruto, Zelda, Marvel Comics, Comic-Con, Big Bang Theory, Pokemon,  Old School Mario; kind of geeky. Basically were awesome; awesome children stuck in adult sized bodies. It happens.

So this year, when Valentines day rolled around, I was BROKE. Gotta love student loans and the increasing gas prices in California. Not to mention buying gifts for my husband is next to impossible. The man buys everything he wants or needs. So I have to rely on ingenuity and pure luck to be able to get him a gift that he doesn't already have. Guys say girls are difficult, but really it's the guys who are difficult. Make a girl dinner that's not burnt, get her flowers that aren't dead, and some chocolate that you didn't eat half of... and were happy. Simplicity ladies and gentlemen. It's fantastic.

So as I was saying... I had to find something cheap, easy and not too time consuming. (At the time I was a full time student, had a full time job, and my part time job in the military. I was a very busy lady. ) I was searching through Pinterest for an idea, because I was irrevocably at a loss for what to make or get for my husband. I stumbled across an absolutely fantastic Zelda quilt on Etsy. I WAS IN LOVE. Then I clicked the link and saw the price. I was so very not in love with that. It was almost $300.  So I started thinking of alternative ideas. Now, I am quite decent at sewing, and have made a few quilts. But... I already had plans to make my husband a Marvel Comics Quilt for his birthday. So I quickly nixed that idea, But a simpler idea came to me. I decided that I could make a cross stitch in a Zelda theme. I tossed around a few ideas, but finally settled with the idea of using a Boss Key somewhere in the design. I finally picked "You gave me the key to your Heart" In my design I even used an actual Boss Key from Zelda: A Link To The Past. (For you non-nerds... it's the key that you use in the game to open the doors to the Boss's Lair so that you can clear the dungeon.) 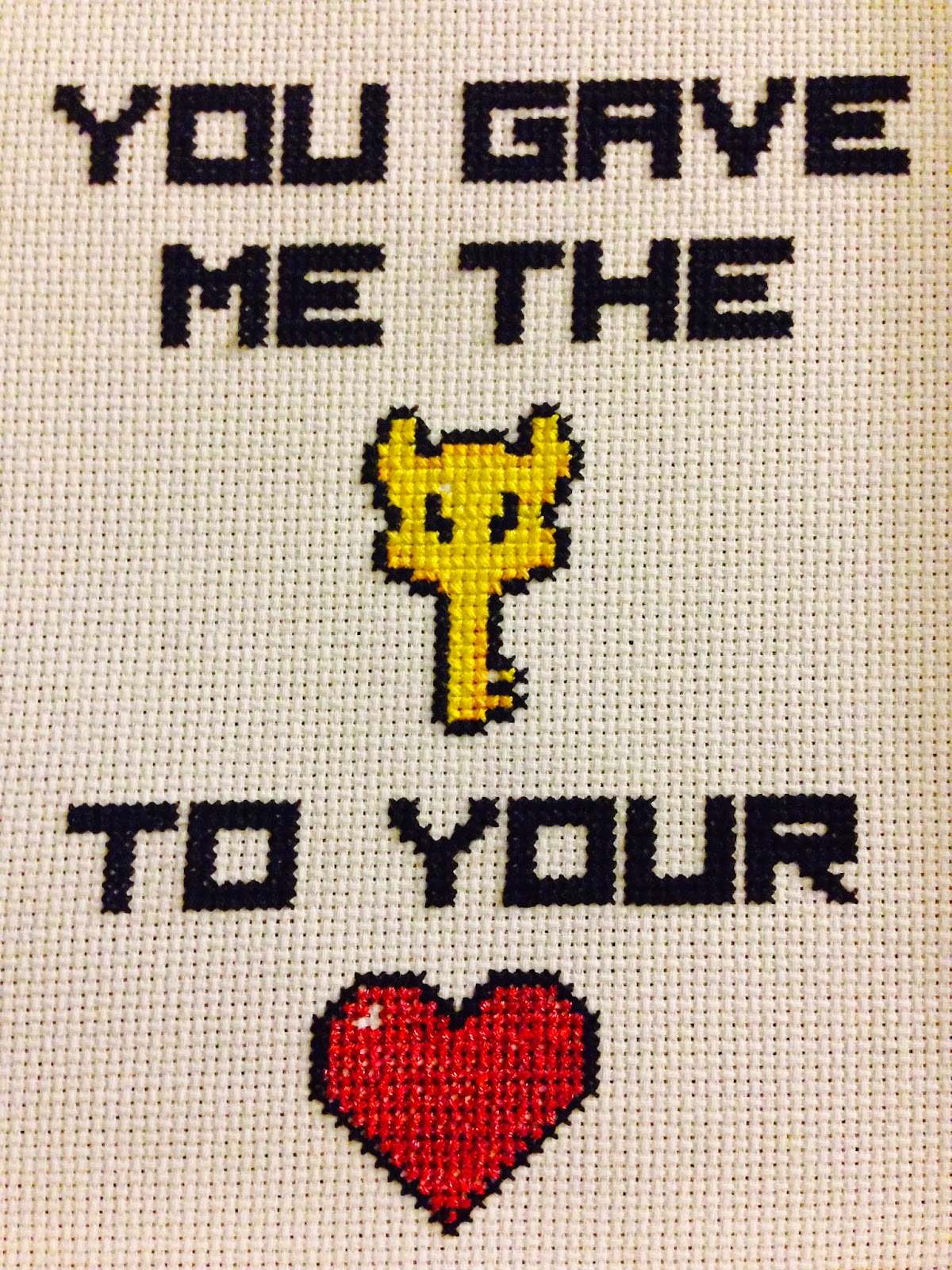 This is what the final design looks like. I also framed it and hung it up in his office area. I do have a few more Zelda themed ideas that I would like to eventually make for him. But for now, he just has the one.

For this Cross Stitch I used:

I didn't have a template for the design as it was an original idea, so with a lot of trial and error I finally finished drawing the design directly onto the fabric with a pencil. I then started stitching. It was really simple until I hit the red thread. I had chosen the metallic version of the red embroidery thread... and boy did I regret it. It was horrible. I got so frustrated after about the 6th time the thread frayed and broke that I threw the cross stitch and cried. Yes. I cried. Over thread. Not my finest moment. But it was literally already Valentines day and I only had about another hour before my husband was going to be home. P.S. I am a HUGE procrastinator y'all. Like I said earlier... I needed a project that was not too time consuming. I should have mentioned that I started this two days before Valentines, and that I only had two hours each day to work on it before my husband got home from work. So I finally picked it back up and dealt with my thread problem. I found the easiest way to deal with the evil thread is to use short manageable pieces. It took more time and thread to do it that way, but at least I wasn't crying anymore.

After I finished the sewing, I ironed my design. Word to the wise... Iron from the back and not on the front. I've ruined one before because water was on the fabric and it left a super terrible yellow mark all over it. I framed my work and hung it with about 45 minutes before he got home. I was cutting it close, but honestly it came out wonderfully. I'm super happy with it, and most of all... My husband really likes it. Even when we moved, once we got to the new place he hung it right over his computer.

So what do you think of it?